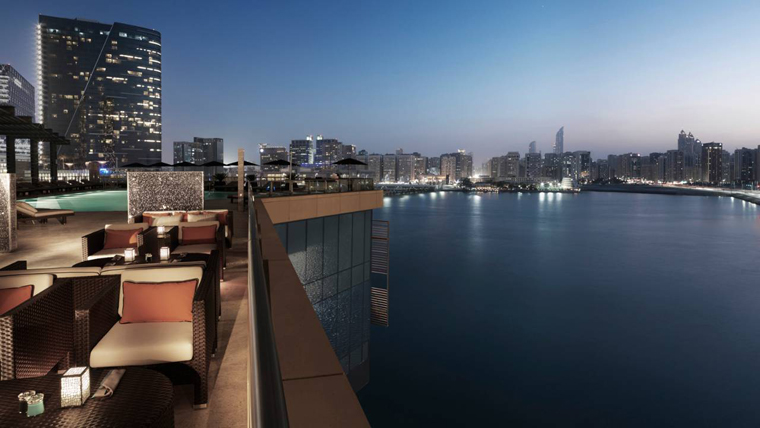 On a recent visit to Abu Dhabi, a friend from the hospitality industry recommended we try the Four Seasons Hotel. Located on Al Maryah Island, the striking new 34 storey tower, offers guests, views of the Arabian Gulf and of the city skyline and enjoys a unique and stunning location right on the waterfront. A charming 5.4 kilometre long promenade with a host of cafes, a high end shopping mall and the Cleveland Clinic all contribute to making this hotel property a unique and an ideal choice for many travellers seeking the best in luxury.

Abu Dhabi is the capital of the United Arab Emirates and after Dubai, is the second most populous city in the seven emirates. We had an Eithad flight out of Abu Dhabi and rather than spend a couple of extra nights in Dubai, we decided to try out the Four Seasons hotel at Al Maryah. We arrived at the hotel and were met by the GM, Sam Loannidis. A charming young man with looks of a Hollywood celebrity, Sam passionately introduced the hotel to us and talked about the 38 luxurious suites and the 200 stylishly appointed rooms which he believed were the best Abu Dhabi had on offer. He said that he was particularly proud of the restaurants with their waterfront terraces and the Dahlia Spa which he insisted we both try. 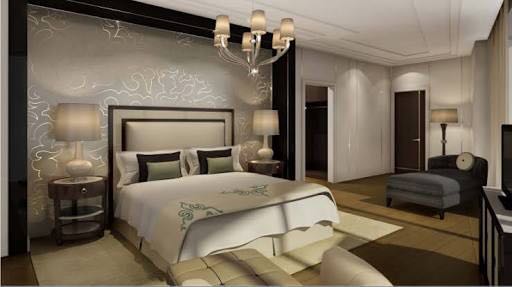 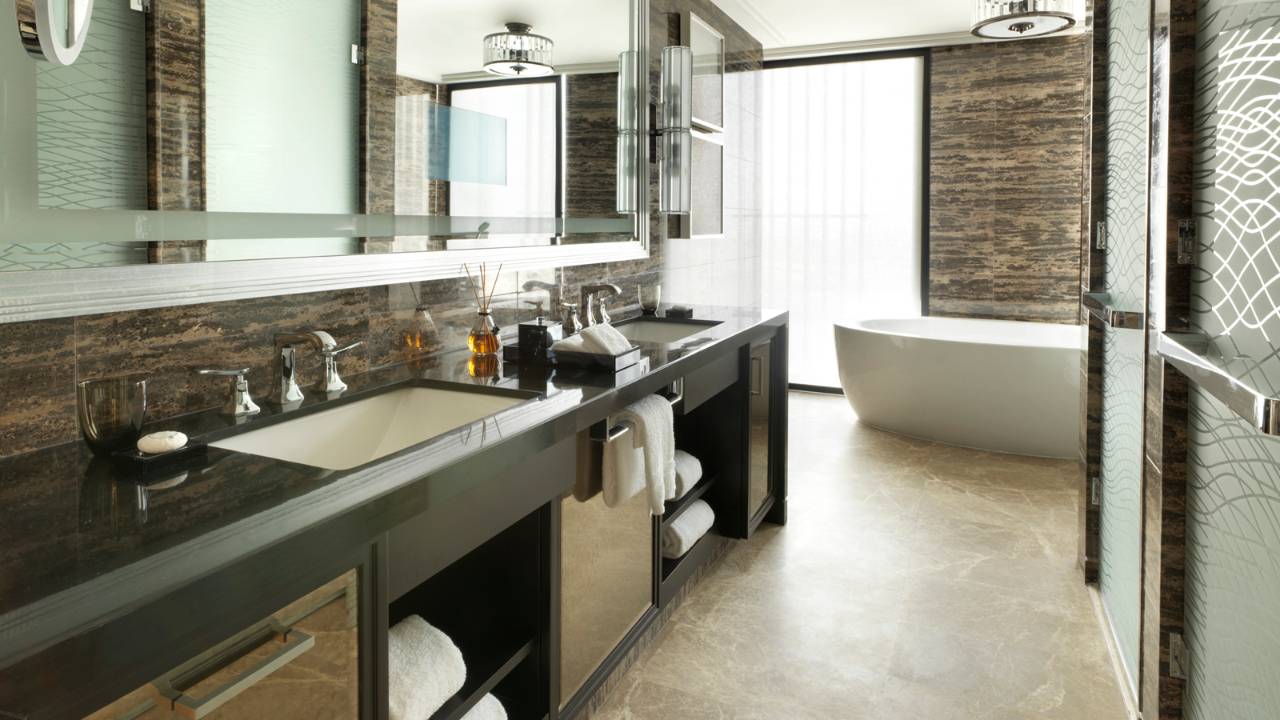 We were shown to our room which was tastefully done up in soothing grey and blue colours. The white marbled bathroom was spacious and sophisticated. When we look out of our window, we were pleased to see views of the city skyline and of the pool deck below. It was a lovely day and hotel guests were lounging around with cocktails in hand, enjoying the bright sunshine. 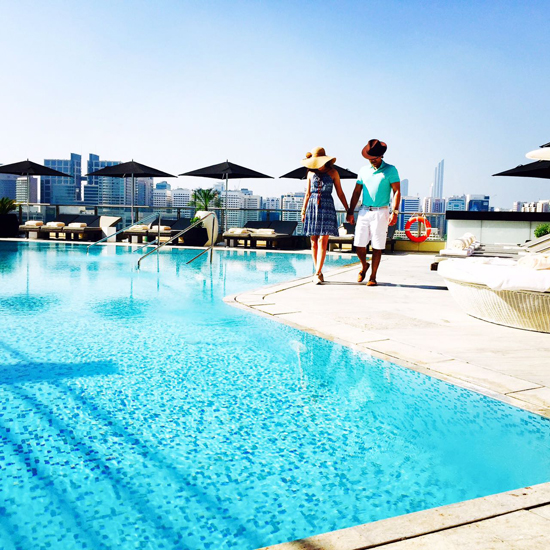 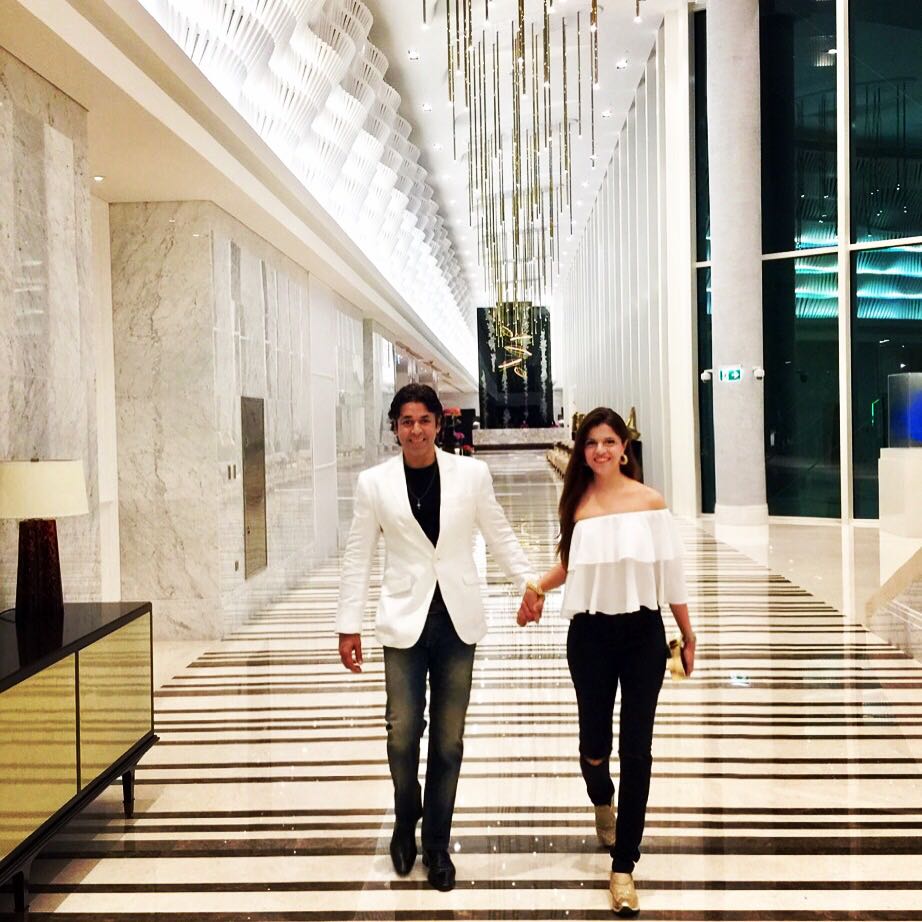 After settling in we decided to take a quick stroll around the hotel. We stopped by at Butcher and Still, a 1940s Chigaco-style steakhouse. We were told that dinner would be served only after six pm. So we decided to have a quick afternoon drink before returning to our room. I loved the interiors and what caught my attention and fancy was the antique, Tanqueray No. 10 Imperial Martini Shaker. We were told that this was one of five in the world and the only one in the Middle East. I asked for a cocktail to be shaken up in the Imperial shaker but I did not wish to know what the mixologist had in mind for me. It was quite a surprise and I can say this that she did make and shake me up a deadly cocktail. 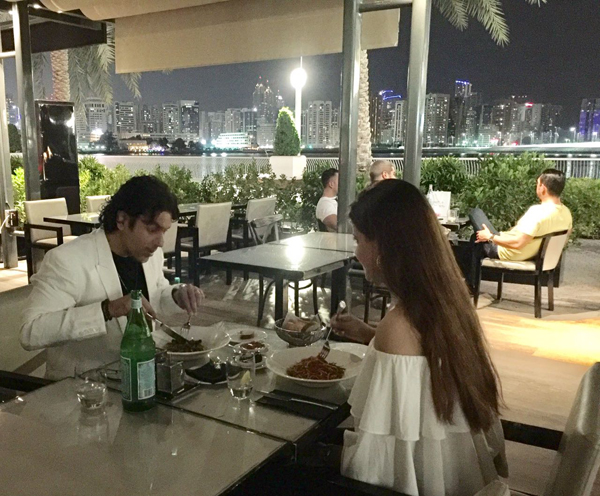 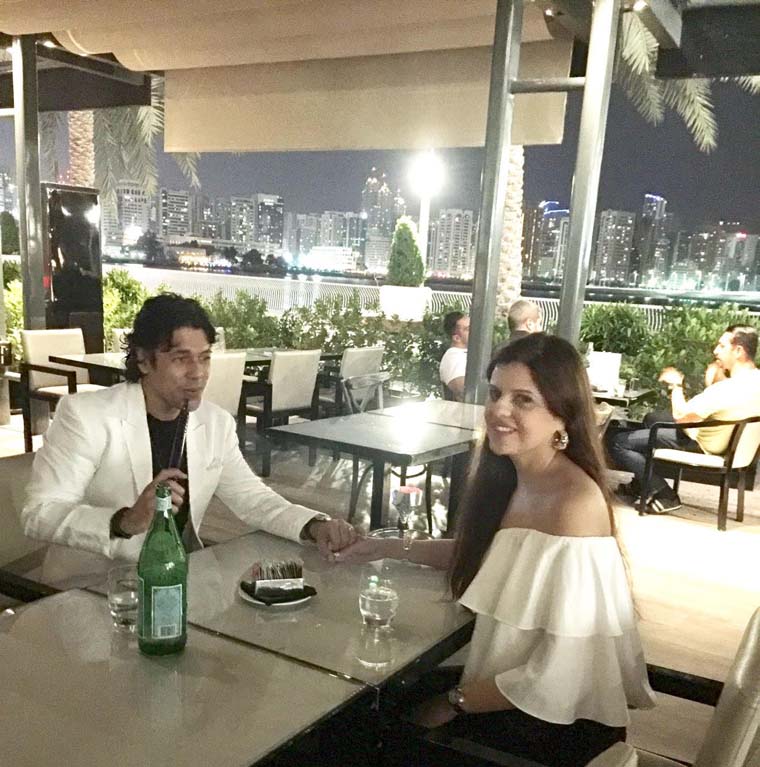 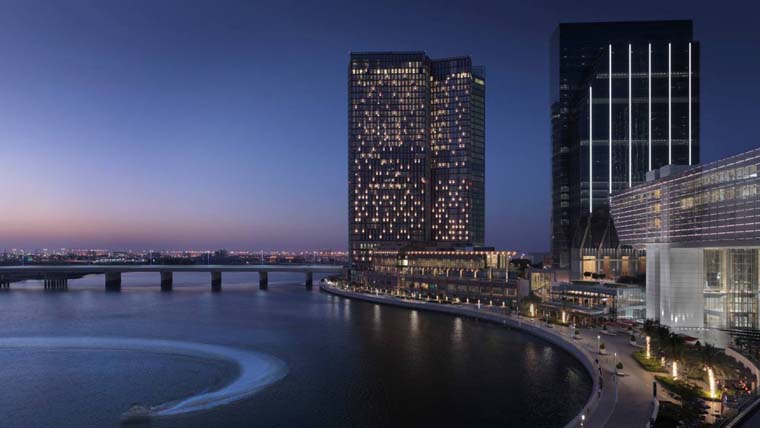 We returned to our room for a brief nap and shortly after stepped out to explore the promenade. We were informed that the hotel offered six creative restaurants and lounges, each with it’s own expansive waterfront terrace. However, we chose to be adventurous and preferred to try restaurants outside of the hotel. For some retail therapy, there is a direct access to the high end Galleria mall from the hotel. Luxurious brands line every inch of the mall interspersed with well known cafe’s like Bateel, the Godiva chocolate cafe and the Armani Cafe. Since it was nearing dinner time, the area quickly transformed into a chill out kind of a lounge with light music, shishas and impressive meal choices. We selected the Armani Cafe and ordered an apple flavoured shisha to start our evening. The weather was quite pleasant and after a delicious Italian meal and celebrating our time together at this wonderful cafe, we decided to walk along the 5.4 kilometre promenade. Al Maryah Island is an integrated, 114-hectare (282 acres) mixed-use development in the centre of Abu Dhabi, and has been designated as Abu Dhabi's Central Business District. It aims to follow in the footsteps of 24-hour financial districts around the world. Our time at the hotel was short but pleasant. I would strongly recommend it and would give it an impressive 7 out of 10 mango stars. Had we stayed longer and had we had the opportunity of trying the restaurants, the mango rating does have potential to increase.

Dyson says :
Hi Mr. Mitha. The location really looks terrific! I loved the sky-line in the photos. I was hoping to read more about this hotel in detail like your other blogs. Are you planning for a longer stay in this four seasons hotel in the future?
Reply
Alric says :
Thank you for reviewing Four seasons, it looks like a lovely hotel. The interiors looks very goodâ€¦ especially the ceiling in the pics where you and your wife are walking down the corridors. I feel the hotel looks better at night.
Reply
Anand Kumar says :
Sajj, I loved this blog, itâ€™s nice and brief. Itâ€™s to the point what one really needs to know about this hotel. Canâ€™t wait to read your next adventure. I wonder where are you planning to go next.
Reply
Jordon M. says :
The rooms are luxurious. The service is amazing. What I liked most about this hotel is that the staff is very friendly. If service is something that you are looking for I think nothing can beat four seasons. The room offers really good views! According to me the view is more mesmerizing at night.
Reply
Haegar says :
Thank you Sajjid for reviewing this fantastic hotel. In fact, I have been following your blog closely especially the hotels you visit. It gives me a fairly good idea on the kind of services they offer. The room at four seasons looks spacious! I was very impressed with the views in the photos. The sight is something that is likely to stand out when someone is hunting for the room with a view.
Reply
Murray says :
I canâ€™t wait to take a walk around the promenade! This is the first thing I am planning to do!!!
Reply
Shivya N says :
Good job Sajjid. I loved your writing and I am waiting for the next article. Keep up the good work.
Reply
Jyoti V says :
Hi Sajj I have been to this hotel for a short stay. During my stay there, the staff was very polite, friendly and courteous. The quality of service is impressive. The hotel is a magnificent place, studded like jewel in the crown at Al Maryah. Reading your blog provided me with one insightful information I was not aware ofâ€¦the imperial shaker. I did not have the opportunity to explore the entire hotel, but I am planning to do so in my next visit.
Reply
Omkar Srivastav says :
I want to thank you for presenting your thoughts beautifully in this write-up. You have described this hotel with the perfect choice of words! It makes reading fun and informative at the same time. I will certainly plan my visit to this hotel soon.
Reply
S. Mirja says :
My friends told me about the Four seasons hotel in Abu Dhabi offers the best experience in luxury hotels. Now I know why! Your description closely resembled what my friends experienced. The luxurious and spacious rooms, the fine hotel staff and the food. The other aspect what this hotel offers is the view. I think this what is sets the hotel apart.
Reply
S. Dixit says :
Their attention to details is outstanding. I was there once and I still remember how well we were treated or rather pampered! The staffs are helpful and attentive to your every need. I liked what I read about the hotel in your article. Itâ€™s a great hotel!!!
Reply