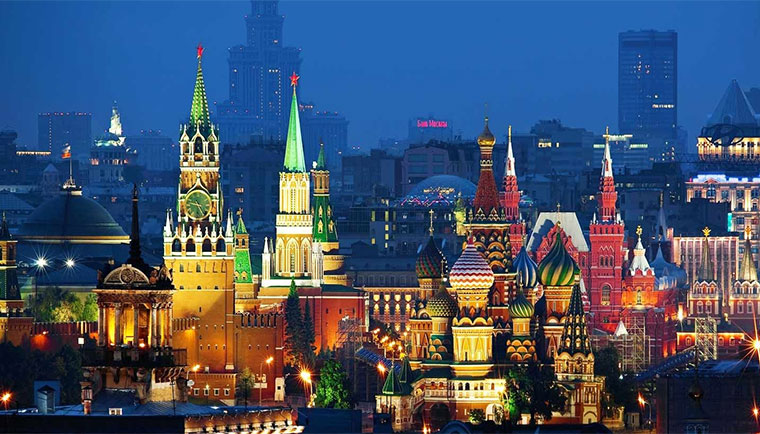 Ever since the end of the cold war in 1991, I was curious to see what lay behind the symbolic iron curtain. When I finally landed in the city by the Moskva river last week, I wasn’t prepared for what lay ahead. I was in Moscow for a 2 day conference, but I knew I had to make my limited time in this city count and I had to visit at least a few of the captivating architectural marvels this magnificent city had to offer.

As luck would have it, the most prominent and well known of the local buildings, I had so often read about, were literally a stones throw from my very luxurious hotel, The Four Seasons, Moscow.

I was hoping my flight from Doha to Moscow, on Qatar Airways would be on the dream liner. Sadly it wasn’t. I was told by the crew that the airline had decided to switch to a smaller aircraft recently, owing to the light traffic between Doha and Moscow. The service on flight though was exceptional. On landing in Moscow, I had the hotel transport vehicle waiting for me. A very comfortable 7 series BMW with Wifi and an enthusiastic driver Anwar, who spoke limited english, welcomed me to Moscow. The initial hour of the 90 minute drive from Domodedevo airport to the city was drab. I was therefore thrilled when I first saw the shiny blue dome of a cathedral and furiously clicked away with my IPhone camera as we sped past it. This though was again followed by a path of leafless bare trees, grey buildings and cars which looked like they hadn’t been washed in weeks. 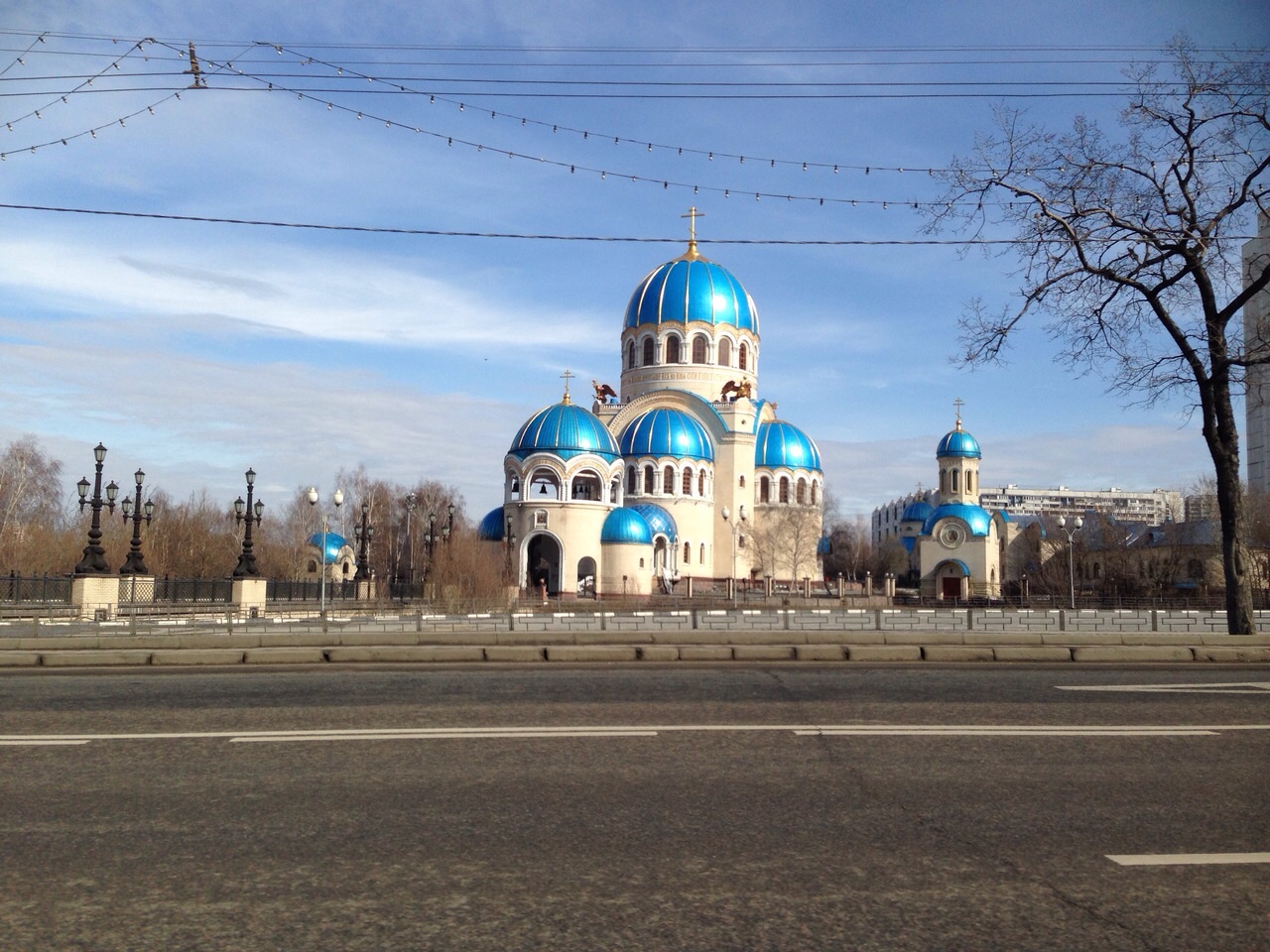 Just as I resigned myself to the fact that I was going to dislike Moscow, we entered the city and my opinion went through an almost 360 degree spin. Fabulous looking structures greeted me on almost every turn. I was particularly awed by the Stalinist architecture. My driver pointed out a couple of stunning buildings which had been made in a Russian Baroque style with a combination of a strong Gothic kind of influence. One such building was the Radisson Royal hotel, the venue of my conference.

Just as we were exiting the Kremlin bridge, the police halted the traffic. It seemed like several minutes had passed and we hadn't moved, but I didn't mind as I had fabulous views of the stately red Kremlin walls and other interesting looking buildings in the area. Anwar drew my attention to a convoy exiting the Kremlin gates at that very moment. Led by motorbikes and several official shiny black cars, Vladimir Putin, the Russian premier drove past us. Anwar said I was lucky to have seen the official car of the countries most important man. We then drove past the State Duma and the Russian State library, both awesome looking structures. 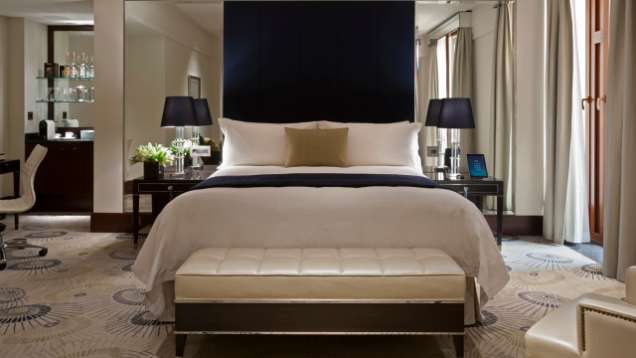 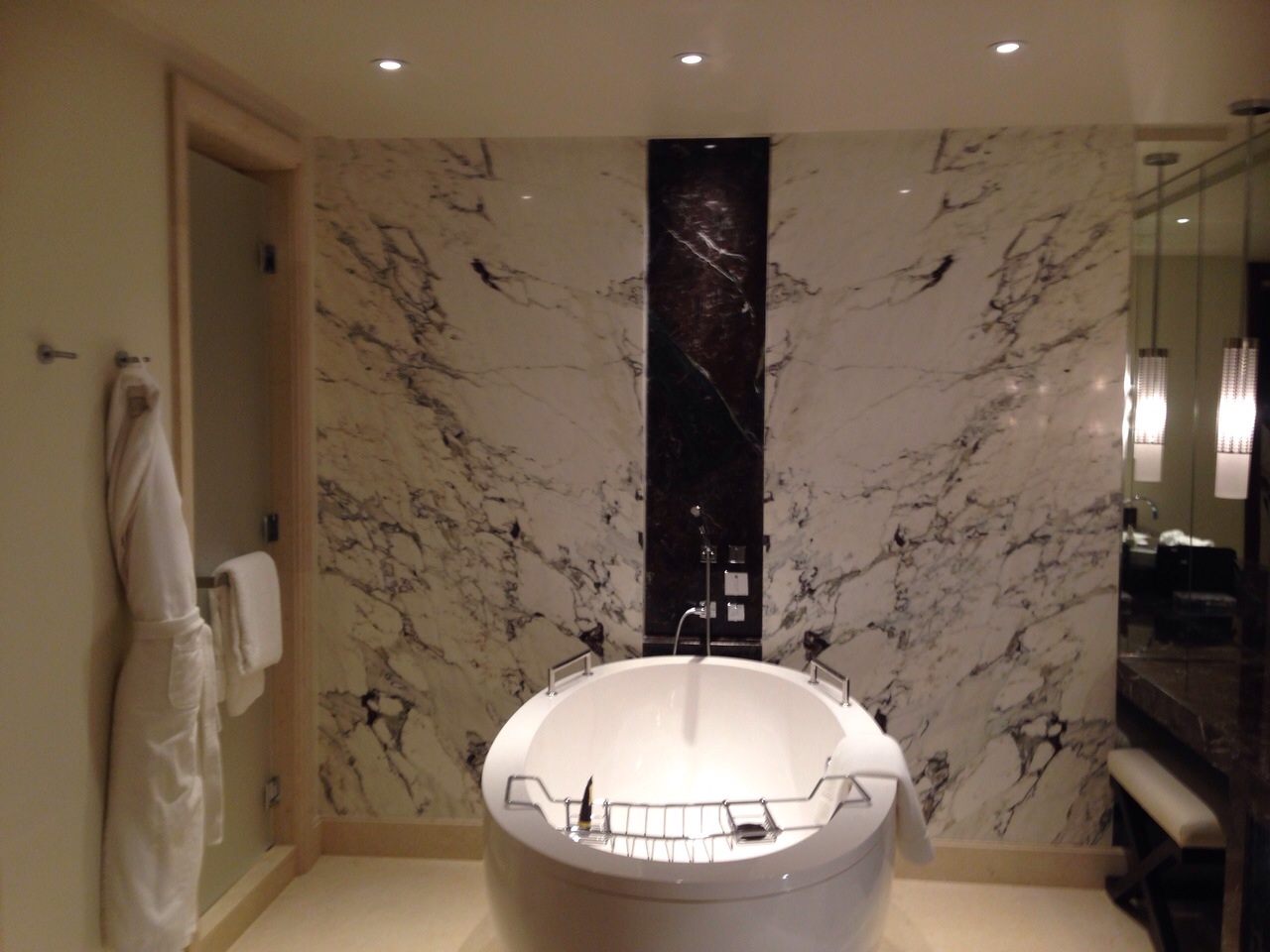 Shortly after, we arrived at the Four Seasons Moscow, my home for the next three nights. The hotel is a replica of the Hotel Moskva. There is a deep connect with history at the hotel, which you get a feel of the very instant you walk through the doors, after being greeted by the friendly Russian door man. I was checked in smoothly by Anastasia and was shown to my room by Gino, a sprightly young Italian man, who was ever so eager to introduce the splendid room and it’s many features to me. I presented him with a scarf for his mother, which he so appreciated, he didn't stop thanking me till much later. 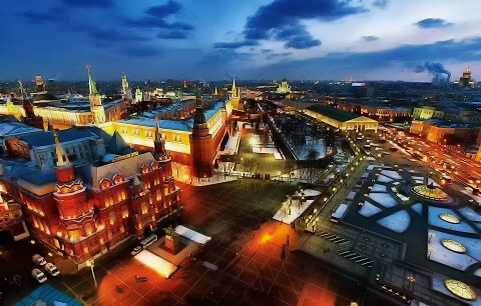 The Four Seasons Moscow is opulent in it’s decor and has a location which even the Tsars and Tsarina’s would envy. The hotel is a few minutes walk from Red Square and just around the corner from the magnificent Bolshoi theatre. Breathtaking views of the Kremlin and The Cathedral of Vasily the Blessed commonly known as Saint Basil's Cathedral, greet you the moment you walk through the gates to the square.

It was snowing when I stepped out of the hotel and set out to see St Basil's cathedral. The building is shaped as a flame of a bonfire rising into the sky. It is so appealing to the eye that I wondered why Sir Walt Disney, didn’t fashion the sleeping beauty castle at Disney World on St Basil’s Cathedral instead of Neuschwanstein Castle. A monument to D. Pozharsky and K. Minin is located in front of St. Basil’ s Cathedral. These two heroes liberated Moscow from Polish invaders.

While at Red Square I took several pictures of the stunning structures surrounding me. I did have the option of a tour of St Basil’s Cathedral, visiting the diamond fund at The Kremlin, the Kremlin Palace, numerous churches and the Kremlin Armory Museum. However, I chose not to do so as I wished to return with Laveena, who did not accompany me on this brief business trip. 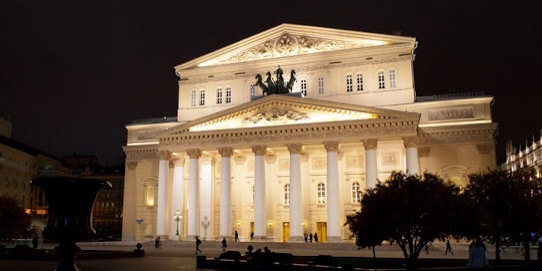 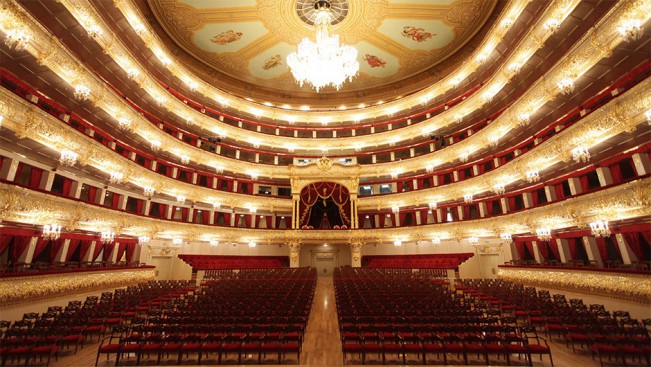 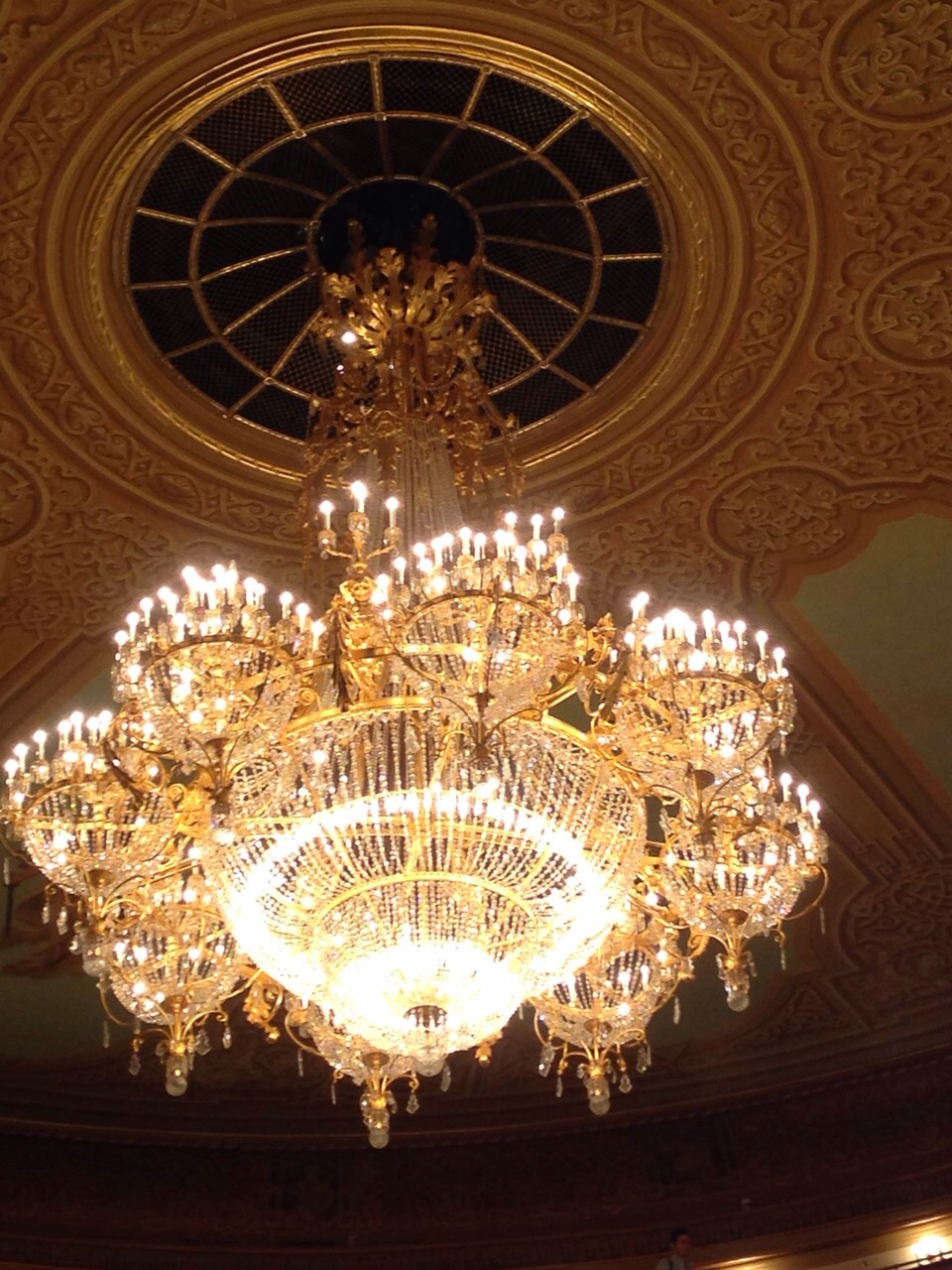 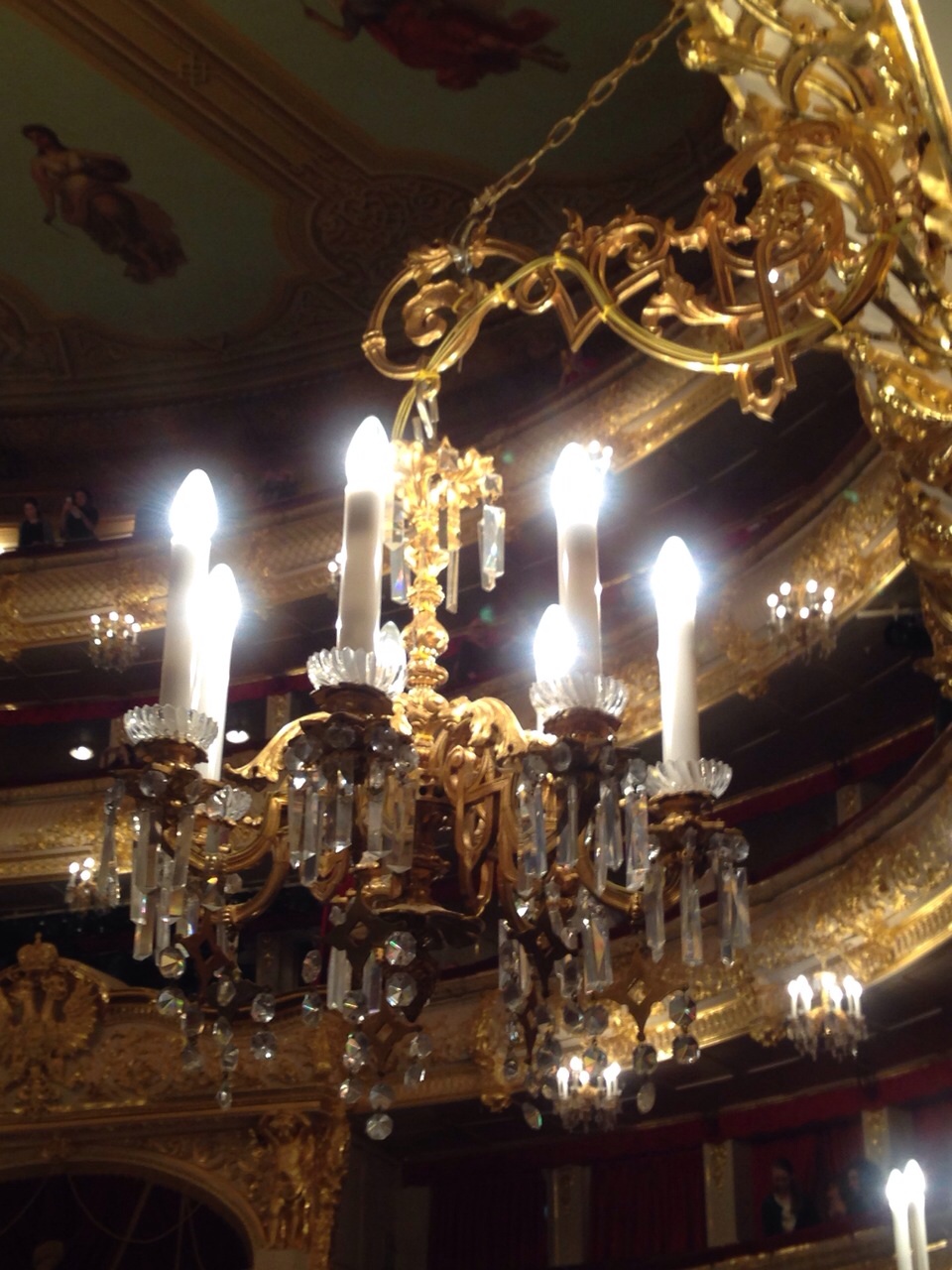 I did however buy a ticket to watch Pytor Tchaikovsky’s 'The Enchantress' at the Bolshoi theatre and the experience I had is worth a mention. I walked to The Bolshoi from my hotel. Its iconic neoclassical facade captivates you the moment you set eyes on it's magnificence. Russian’s in their finest dresses, waltzed through the doors like aristocracy probably did in the old days. The ushers guided me to my respective section after i left my down jacket with the lady at the coat check. There was an air of nobility which was quite evident at the theatre and as the show bell rang and the doors to the main theatre opened, an orderly walk to our seats followed. Several within the audience seemed to be friends as greetings were exchanged politely. To be among the Russian gentry was in itself exciting, however the imperial decor and the interiors of the Bolshoi overshadowed all else. I enjoyed the performance thoroughly. There is a digital display above the stage which translated the opera into English. I could follow everything. 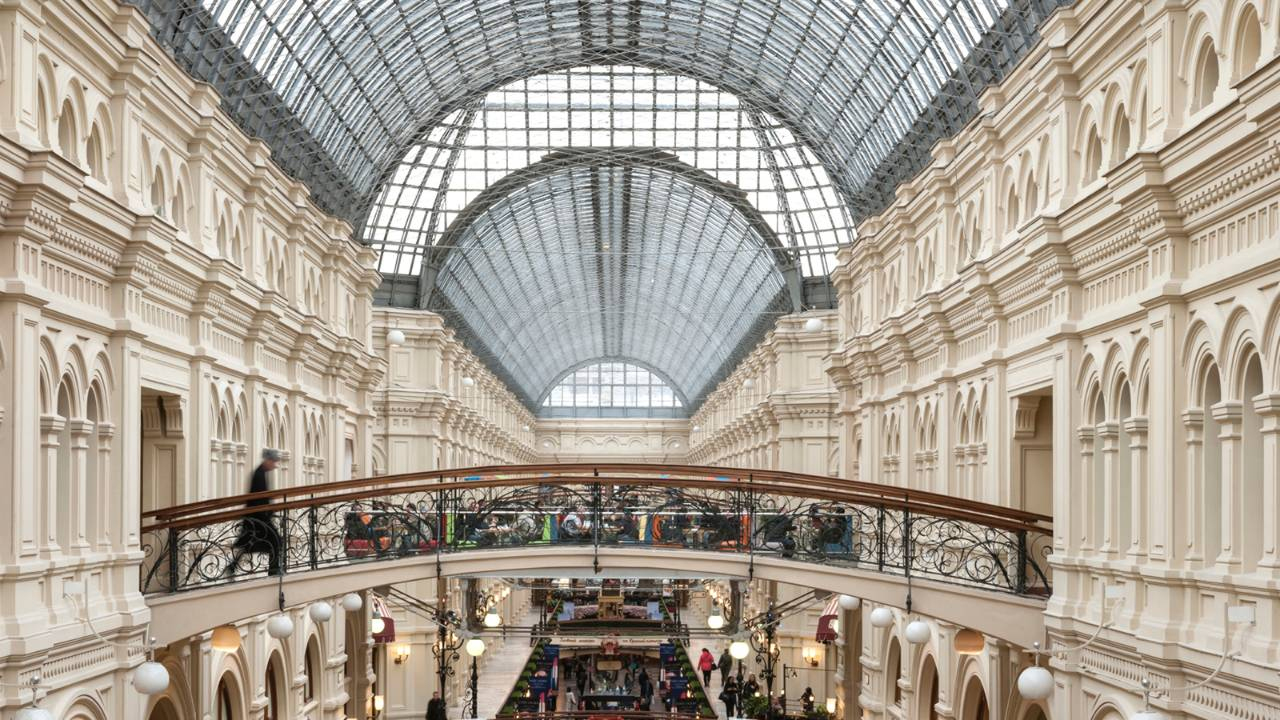 There is a walking street not far from The Bolshoi which connects to Red Square. On this street are a number of eateries which thankfully are open till late. After grabbing a quick bite and a beer, I returned to my hotel, vowing to return to this stunning country with Laveena, real soon. The recent devaluation of the Russian rouble makes the country most affordable. In fact, I visited the famous GUM, the large mall located in the Kitai-gorod part of Moscow, facing Red Square. The walk through was quite spectacular and the prices at the stores surprised me.

At breakfast the next morning, I met with Sanjeev Shukla, the charming young Director of Marketing at the Four Seasons Hotel, Moscow. I know Sanjeev from Mumbai, when he was with the Four Seasons in the city. It was a pleasure to have met him and he promised me an exciting trip when I returned with Laveena. He said that he would plan a backstage visit at The Bolshoi, a visit within The Kremlin, a cruise on the river Volga and many other exciting, off the beaten track experiences.

Hijacked by an insensitive Jet airways

Razia Mitha. says :
In a trance and completely spellbound Saj!!!your write so beautifully.Yes,Dad and me too loved Russia.Awaiting your next trip with Laveena.
Reply
Gita says :
Beautiful rendition of your travels. This is one country that has always intrigued me and I will use your composition as my travel guide whenever I visit. I sincerely urge you to read this insightful article "Generation Putin" in the magazine called Foreign Affairs , Jan- Feb'15. It was v interesting to read how Putin generation is prosperous with cell phones , easy access to Internet , foreign travel , yet they did not adopt more liberal views or international out look than their areas. They have deep contradictions to contend with in their daily lives. They are disillusioned with the government but planning to serve it, critical of corrupt officials , but unwilling to resist them and intensely focussed on the US , which they view as Russia's most dangerous adversary and its indispensable ally. Keep sharing your lovely travel tales with us inspiring to look forward to new destinations!
Reply
Shunali Khullar Shroff says :
Evocatively written. Wish I had seen the Bolshoi ballet while in Moscow. I was told that the real beauty of Moscow is only revealed when it's draped in snow, a la Zhivago, ergo should plan a trip there in January. Instead we saw a few summer days in Moscow and came away tres disenchanted. It was St Petersberg that I found magical in fact. Oh well, another time.
Reply
Sajjid Mitha says :
In reply to Shunali Khullar Shroff
We have planned a visit to St Petersburg this summer. Let us hope the magic you felt, lives on :-)
Reply
Shunali Khullar Shroff says :
http://shunalishroff.com/tag/moscow/ So this was my post on Moscow.
Reply
Shruti Shah says :
Loved the piece on Moscow ! Sounds like a city that hasn't aged and also sounds like something out of a fairy tale. Liked the details that went into the post :)
Reply
Sajjid Mitha says :
In reply to Shruti Shah
Thank you Shruti :-)
Reply
ismatg says :
Loved the descriptions! Makes me want to make Moscow my next destination!
Reply
Sajjid Mitha says :
In reply to ismatg
Thank you Ismat :-)
Reply